A Case Study in the Pursuit of Excellence through Research 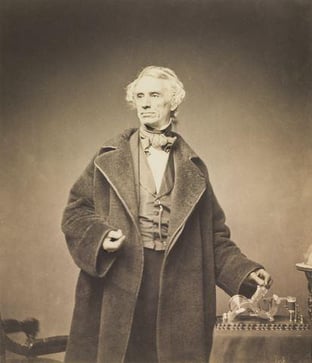 The pursuit of happiness and success are companions to the pursuit of excellence. Excellence is attained through research, practice, discipline, humility, and open-minded study. Endeavor to see the big picture; to be great, invest in becoming great. This is the story of someone who did just that.

Before Samuel Morse captured abounding success with his invention of the electric telegraph and co-invention of the corresponding Morse code, he was hailed as an accomplished painter. Despite initial protestations from his parents—who acquiesced once they observed his adamant pursuit of painting and his talent for it—at nineteen, Morse chose painting as the medium for his life’s work. As such, it was nothing to be taken lightly. Morse decided to pursue excellence.

Morse left for London under the tutelage of Washington Allston, a prominent artist at the time. Morse worked with Allston for four years, “working as he never had, driven, as he said, by a desire to ‘shine.’” Historian David McCullough writes, “As a teacher, Allston was exceedingly demanding. His critiques could be ‘mortifying.’”1 Morse himself wrote, “when I have been painting all day very hard and begin to be pleased with what I have done . . . to hear him after a long silence say, ‘Very bad, sir. That is not flesh, it is mud, sir. It is painted with brick dust and clay!’” At such moments, Morse continued, he felt like slashing the canvas with his palette knife. He felt angry and hurt, but with reflection came to see that Allston was no flatterer, but a friend, “and that really to improve I must see my faults.”2 Allston later introduced Morse to his instructor, the legendary Benjamin West, who proceeded to take great interest in Morse and provide further mentorship. 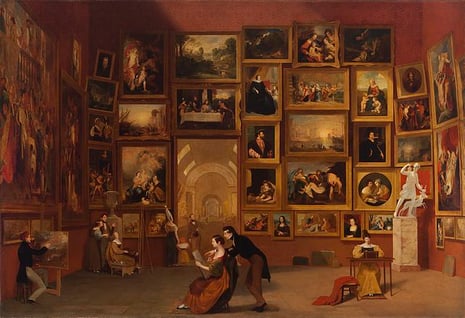 Morse returned to the United States and began painting portraits to raise enough money to go to France and “continue his artistic education.”3 During this time Morse painted many eminent figures, including President James Monroe and Lafayette. Upon the passing of Morse’s wife and parents, he left for Europe. In addition to his long stay in Paris, Morse spent over a year in Italy. While there he spent his time in museums and galleries, “he studied paintings, made copies on commission…did landscapes, filled notebooks with sketches of and comments on churches, street scenes, and processions. At the Palazzo Colonna in Rome, a sixteenth-century portrait by Veronese had awakened him as no painting ever had to a new understanding of color.”4

Find Your Excellence Through Study & Research

Morse’s greatest artistic accomplishment came last. As the compilation of everything he had learned from his time with Allston and West in London, portraiture in the United States, and his time studying in Italy, Morse tasked himself with a piece that would test the breadth of each skill and technique he had learned. With a gallery at the Louvre at his artistic license, Morse “set himself to render a generous sampling of the world’s greatest works of art, altogether thirty-eight paintings—landscapes, religious subjects, and portraits, including Leonardo da Vinci’s Mona Lisa—and convey in miniature the singular beauty and power of each.”5 This painting, Gallery of the Louvre, required Morse to imitate the styles of 38 different paintings and their painters—a feat that can be accredited to Morse’s dedication to excellence in painting and the research he did to learn from the great painters. Morse not only learned from his teachers but made mentors of each artist whose work he recreated. 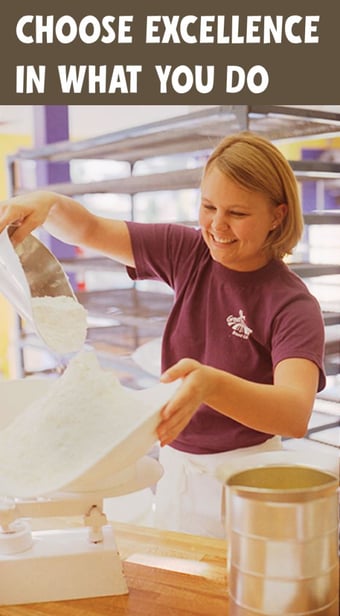 You’re likely wondering what Samuel Morse and his career as a painter have to do with the price of tea in China. Or the Bread Business. You see, Samuel Morse’s goal was never simply to paint; he wanted to be a great painter. He mapped out the path he would take to get there, and he pursued those goals ardently. He sought help from those he looked up to, took their criticism as well as their praise, sought out the work that he admired and learned from it, and—when he had done his research—he was able to compile his knowledge to create something truly great in Gallery of the Louvre.

Reduce Your Work With a "Think Tank"

One of the perks of the Great Harvest franchise is that we have done a lot of the research for you. Through years of experience and hundreds of bakeries, we have developed best practice systems that can mitigate the uncertainties of opening a new small business. Think of it as a head start in your own pursuit of excellence.

What makes this business both exciting and challenging is the fact that the world won’t stand still. It’s like trying to dress a toddler. Or herding cats. Without releasing the core values and standards of your business, you must remain flexible to the changing demands of the market. To do so, bakery owners need to be listening to their customers. Not every idea is a gem—you can probably skip the request for a fruit punch water fountain—but your customers will have valuable feedback. That is one reason that we encourage owner presence in our bakeries.

The Research We've Amassed Will Help You Reach Excellence Faster

Owner presence is, among other things, a means of ongoing research. In addition to the research that you can do in your own bakery there is research that has already been done for you—because other bakery owners have done it. Our community of bakery owners is able to share their experiences with each other to support and strengthen the Great Harvest Franchise as a whole. Aside from your own customers and other bakery owners, as a franchisee, you also have the franchise office as a resource. We are more than happy to answer questions, and there are enough varied experiences in the office to provide a well-rounded answer.

Curious about the Great Harvest franchise? Do your research!

Appreciate the pursuit of excellence through research? Start here:

"Samuel Morse with his Recorder by Brady, 1857" by Mathew Brady - Christies. Licensed under Public Domain via Commons.

"Gallery of the Louvre 1831-33 Samuel Morse" by Samuel Morse - Terra Museum of Art. Licensed under Public Domain via Wikimedia Commons.

I am Ilana Greenslade, a Training & Development Specialist at Great Harvest Franchising. I received my BA from Willamette University with a double major in Classical Studies and Archaeology. While I still enjoy translating Homer from the original Ancient Greek, constructing a Harris matrix, and archaeological drawing, the discovery of Great Harvest pulled my life in a different direction. I was first introduced to Great Harvest while at college and was thrilled to see a new Great Harvest opening in my hometown. I was hired as their sweets baker and met the Great Harvest training staff as we prepared for the bakery’s grand opening. I was immediately intrigued by the existence of a job not only where you get to travel around the country training people on how to make these incredible products—but with a company that has such integrity and transparency, as well. Lo and behold, a short time later Great Harvest Franchising was hiring for a new trainer. I applied, and the rest is history! Outside of baking and solving the puzzles of Homer and stratigraphy, I enjoy dressage, Muay Thai, philosophical conversations, hiking, and reading beautifully written and thought-provoking books.