Finally…a Fad Diet I Can Get Behind! It’s Not a Fad Or a Diet. 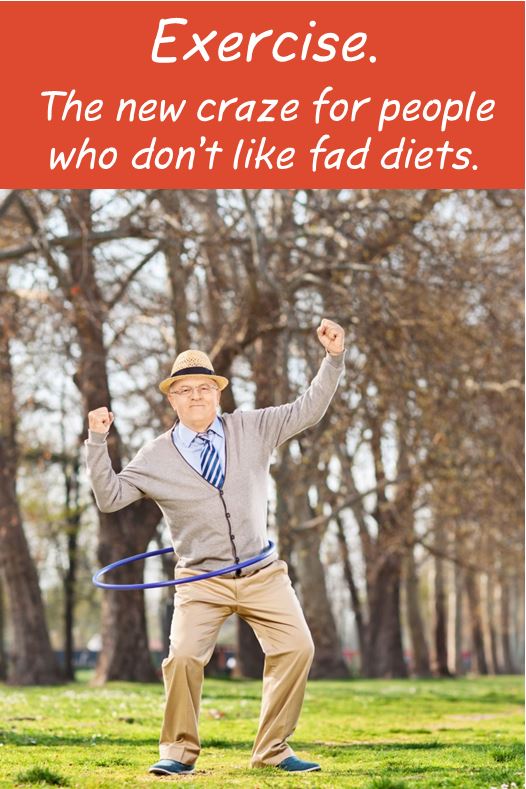 What is the next great diet fad? Exercise! I have read a couple of noteworthy articles in the last few weeks on this point. The first one questions the long-accepted idea that we gain weight as we age because our metabolism slows down. According to the University of South Carolina’s recent study of nearly 5,000 Americans, that isn’t the case. Rather, it’s because we slow down as we age.

On average, the activity level of a 50 year old is less than that of a 30 year old. Most people decrease their physical activity as they age. The study found that even though most Americans’ diets improve with age, it’s not enough to compensate for the decreased physical activity, so they still gain weight.

Based on their research (published in the journal of Medicine & Science in Sports & Exercise), the only way to avoid the weight gain is to maintain your rate of physical activity as you age. If your activity level slows then your weight will rise, even if you improve your diet.

Being healthy has moved from just dieting to questions like:

The real takeaway for me here is that health is a lifestyle issue. The answer is not found solely in diet or exercise or sleep. It is a combination of all three. And that’s not really a fad at all, which is exactly why I like it. There’s no secret formula or magical shortcut; just a lot of common sense, backed by science.

How has your rate of physical activity impacted your weight during your life?

Think about life cycles and how different you are at different points in life. In my generation, childhood was a time to be active and fit. College was an extra thirty pounds. The twenties were healthy and we did sports to meet people. The thirties meant kids and slowing down. For me, my forties were an athletic rebirth. The fifties have made it harder to keep up, as visiting grown kids and having a more demanding career take time. My weight ─ and health ─ have mirrored my activity levels. Metabolism? It is much easier for me to track my health and weight by life changes than that.

This totally makes sense to me and it is why the next big diet fad should be more exercise. But, on the other hand, we can’t forget that aging is real (see The Atlantic’s Running Into Old Age).

Balance the inevitability of aging with an active lifestyle we can choose.

The points in the Atlantic article are well established. Endurance peaks in your mid-thirties. You decline from there. The older you get, the steeper the rate of decline. All true. So, how do we reconcile that with the earlier study that basically says we gain weight as we age because we become more sedentary, which is a lifestyle issue, and not because of metabolism issues, which is a matter of biology? One we can change, the other we can’t.

I actually don’t see any conflict as both make sense. Lifestyles do change. Endurance does erode. They actually seem to feed off of each other. But take this paragraph from the Atlantic article, which quotes Hirofumi Tanaka, an aging researcher and professor of exercise science at the University of Texas:

“Aging merely lowers the ceiling of physical ability,” Tanaka says. "Older adults, even those over 90 years of age, respond well to exercise training and regain much of what they lost with aging.”

But the authors of the 2014 study emphasize that athletic feats like marathons aren’t the only way to enjoy the benefits of exercise in old age. According to their data, any regular vigorous exercise may reduce the decline in aerobic capacity—the ability of the heart and lungs to deliver oxygen to muscles, a main component in overall age-related physical decline—by as much as 50 percent.

Absolutely true. We age, but we can age more slowly if we remain active. It is a fact that you can’t stop the aging process. But through exercise you can manage it. Being fit and active into your seasoned years can help you offset the weight gain that typically comes from an aging lifestyle and you can also set an example for your peers.

I’m calling it first. The next trendy diet fad? Good old-fashioned exercise. I can’t wait for it to catch on.

If a healthy diet is important to you, get our eBook on the nutritional benefits of whole grains (something we know a whole lot about).

If you enjoyed this post, here are some others you may appreciate: