What Are the Land Lines for Your Small Business? 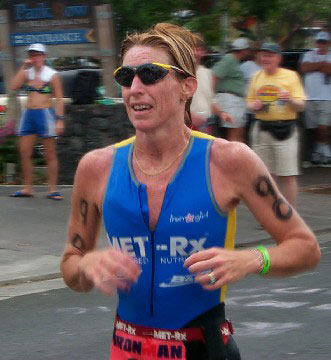 It was cold when I got up this morning so I headed to the treadmill and wimped out on running outside.  Treadmills are boring so I need inspiration.  Today's choice was a video of the 25th anniversary Ironman competition from Kona.  There was something remarkable in the show.  Any IM is remarkable but something else struck me.

Paula Newby-Fraser, the greatest IM athlete of all time in my opinion and yes, I think a woman holds that honor, was recalling what she considered the low point in her career.   In 1995 she blacked out during the marathon portion of the event and could have died.  The video of the incident has a race official standing over her looking a touch stressed screaming "Call 911!  Does anyone have a cellular?  Call 911!"

Are you kidding?  Cellular?  Who doesn't have a cell?  That was just 15 years ago and look how institutionalized that change has become in our society. Today the question might be "Who has a land line?"

This isn't some nostalgia piece for Coolio tunes or Fargo on VHS.  Just the opposite.  Every business, every idea, every relationship has its landlines.  The trick is knowing which ones are worth keeping and which ones can go.  Once you figure out which to preserve, you have to take steps to make that happen.

Franchising has a reputation, in some cases well deserved, for being less than fair to its franchisees.  That is why it is so heavily regulated.

We think we are different.  We are fair to our franchisees and that will always be true but this is one of our land lines we are keeping.

In 2001, a group of franchisees approached me with a radical idea.  Renegotiate the franchise agreement from scratch to the point that we all thought it was good and then allow it to be changed only when both the franchise office and a super majority of an elected council of their peers agreed.  No other franchise company in the world has done that and it is what really makes us different.  We started with a premise that our negotiated agreement was fair and we should change it only when we had a darn good reason.  Not because we feel like it or just found a way to make more money.

The legacy of that is a business and its customer base who have stated -- "Here is what we consider a fair way to do business and we are going to make it work for life unless we both agree to change it."  All of the things that matter are now subject to consensus change management, not one-sided implementation.

I remember presenting this idea at a franchise conference. The first two questions I got were from the COO's of two well-known, national franchise companies.  They were  "Have you lost your mind?" and "Will you not tell anyone else, please because the rest of us don't want to do it."  If your competitors want you to be quiet, odds are you did something right.

Giving up control of your business rules is scary but if you want to really cement your bond with your customers, doing just that makes a perpetual commitment to treat them fairly.

As I finished my run, Paula had not won her 9th world championship, but she did finish 12th.   In her mid 40's.  In a sport dominated by people 15 years her younger.  Rock star.  No one was surprised.

What are your land lines and what are you doing to keep the ones worth keeping?